What Cyclists Talk About

Compilation of videos about what cyclists say. This is not too far from reality. Warning - this picture has nothing to do with the video so don't look for this because it is not in here.

Mt Biker's Dumb Comments - very staged and idiotic but a few funny lines....
Posted by Sojka's Call at 8:01 AM No comments:

Here is the book with the highlights of this trip. It is not cheap at about $20 but I don't make a dime. Blurb is expensive to publish and I did it just to give away a few to friends. But, if you are doing this trip or parts of it you might it find it valuable.

Vicotoria, San Juan Islands and Oregon Coast by Michael Sojka | Make Your Own Book
Posted by Sojka's Call at 8:09 AM No comments: 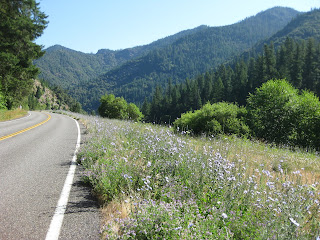 Originally I had planned to camp at Tree of Heaven campground tonight. Somewhere along the road I decided that idea was not so great and that I wanted to eat and sleep at home tonight. I think when I got to the Klamth River market called Quigleys and was looking for food that nothing looked good and so I called my wife from the pay phone there since there is no cell coverage and told her my plan. 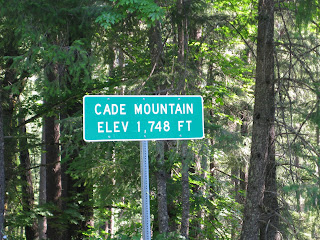 It was going to be a heck of a ride but she could pick me up in Yreka at the Mexican restaurant Casa Ramos. And, I had done the 35 mile ride from Yreka to Mount Shasta a hundred times so that did not seem like a big cheat. 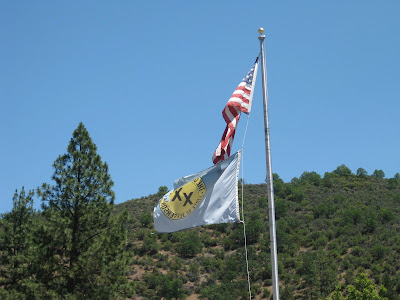 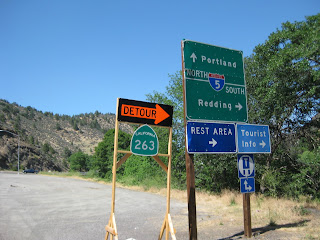 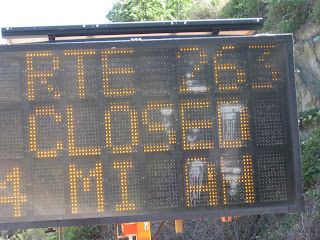 I get to the turnoff for 263 which is a beautiful road next to the Shasta River and find out the road is closed. That means the only way back is over Interstate 5!! I had never ridden this road on my bike and really wanted to do this.

There is no way I am riding 8 miles on I5 with the noise from hundreds of big rigs. So, I call my wife to come get me at the rest stop off I5 at the junction with 96. 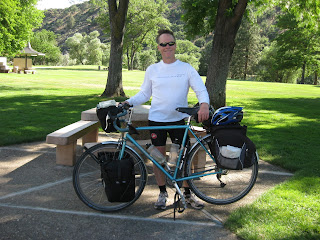 Here I am ending the tour at a highway rest stop. A somewhat ignominious end to a bicycle tour but as you can see I was delighted!
Posted by Sojka's Call at 4:08 PM No comments:

I had thought about this day a lot starting a month before the trip at least. Back and forth went the decision making process. Should I stay in Cave Junction or ride through to Happy Camp over the little used backroad from O'Brien.


Since it was an extra 10 miles past the turnoff to Cave Junction and I had not figured out where to camp there, I decided to go for Happy Camp. The mileage was a doable 75 miles but there was 7500' of climbing which was far and away the most of the trip. 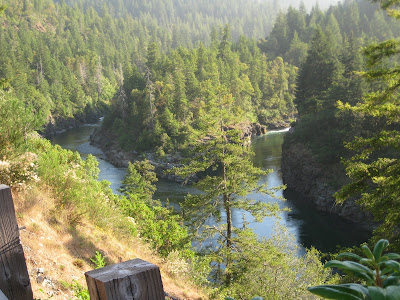 It did not help that morning that I had a headwind all the way along 199. It is a narrow road right next to the Smith River. This is where the middle and north fork of the river come together. 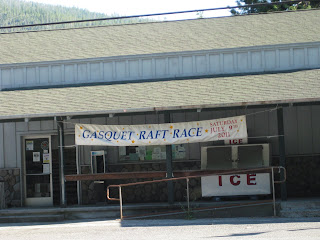 Now, I cross back into Oregon for a little while. 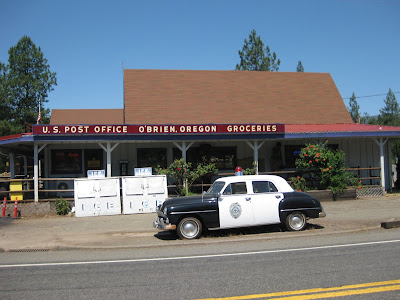 I tanked up on sorbet, iced tea, and other surgery liquid things in O'brien which this picture shows in entirety. It was hot now - the hottest weather of the trip at probably around 90 degrees. I turned off on the road designated by my google instructions. My Garmin was still useless just showing a location on its map but not the road I was on. My instructions said to make a left, right and another left onto the road to Happy Camp. The last left did not materialize where it was supposed to so I flagged down an approaching car who looked a little suspicious of me. I told them my dilemma and they just smiled and laughed a little and said I was on the road and "just keep going", "keep going a long ways up and then down". Sounded a little ominous but at least I was on the right road.


Then I climbed and climbed on one of the weirdest roads ever. It never went down and you could never see valleys and it seemed like a never-ending ridge line with the summit around the next corner seemingly forever. I made the summit around 4 pm and started down. There was never I sign I crossed back into California or was going to Happy Camp. 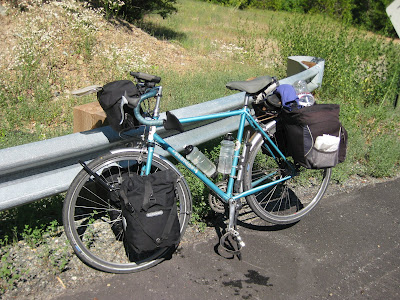 Resting by Indian Creek around 5:30 pm I realized I was dehydrated and in a good bonk. I downed some Goo and Cliff bars but my body was done for. I could not imagine pedaling another 8 miles, setting up a campsite, bathing in the Klamath since there are no showers at the Curly Jack Campground in Happy Camp and then pedaling 4 miles back into town to eat. So, I GOT A MOTEL ROOM  across the street from the market. I ended up buying bacon, eggs, peppers, onions and made a giant scramble in the efficiency kitchen. Then I started in on my dessert which was a sherbert swirl and tonic water. After 3 glasses of this I found a soup bowl that would hold the rest of the half gallon of sherbert and the bottle of tonic water and ate it all.

Even though the air conditioning did not work real well it was comfortable enough to sleep alright. After all the climbing up the river into a headwind and the heat and climb out of O'brien I was spent and collapsed into a too soft bed.
Posted by Sojka's Call at 3:49 PM No comments: 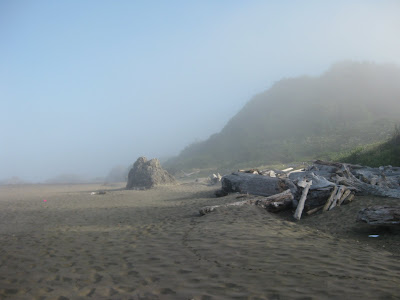 This was going to be a very short day at only 28 miles. I would be crossing back into California and was somewhat sad to leave Oregon. The Oregon Coast had been everything I thought it would be and more. The other cycle tourists had been fun to talk with at the campsites and I knew it would be unlikely to meet more at this time. So, I spent some time at the beach by the campground this morning doing Tai Chi and taking pictures. 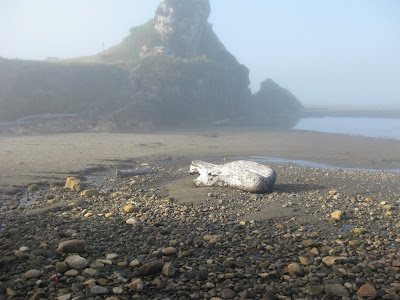 The fog was just lifting and was creating some really fun light, shadow, and surreal effects. 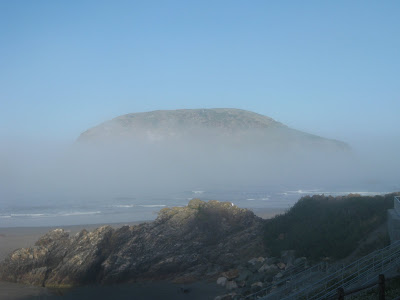 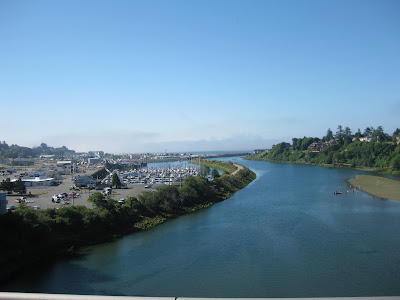 This was going over the bridge at Brookings, Or 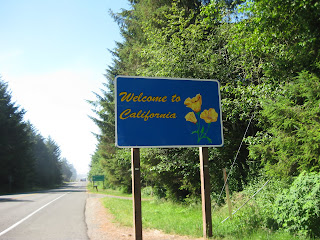 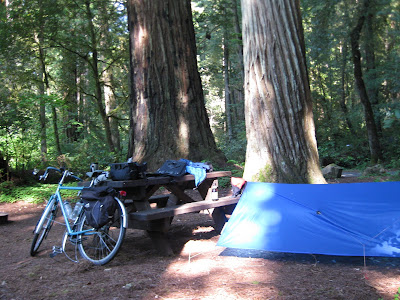 There was a group of touring cyclists in the site across from mine - yea! They had driven down from Reno and started in Fortuna and were going to head north into the headwind until they were tired of it and come back. Nice group that shared their mosquito repellent with me - good thing as the skeeters were fierce there.

This had to be the most beautiful campsite of the trip with 250 - 300' tall redwoods to pitch my tent under and the river a minute away. 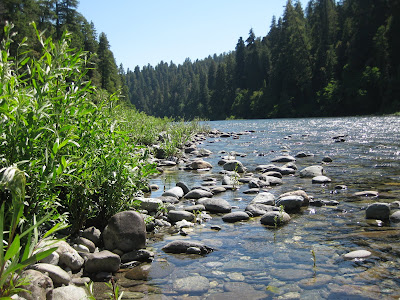 The clean, clear water of the Smith River right below my campsite.

I hung out with other cyclists that night drinking beer, eating cheese and salami, talking bikes and thinking about how early to get up.

This was July 4th so it seemed prudent to get on the road early which is what I did. The plan was to ride the 25 miles to Port Orford and have breakfast there. Leaving Bullard Beach I took the scenic bikeway road and ended up on a dead-end out by this inlet. Very pretty but not the way I wanted to start the day. 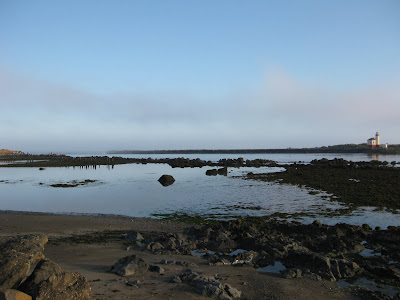 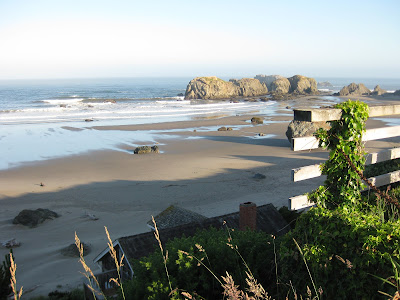 I got back on route and enjoyed seeing the city of Bandon which seems to be suffering from overbuilding. There was lots of for sale signs everywhere. Very pretty views of the coast from several of the properties. Something, though, felt a little hollow about this place. I would need to spend more time here to know if that was a valid observation or not.


This silly looking sculpture was along the road going out of town. 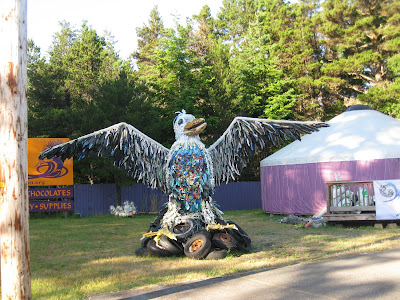 Pedaling into Port Orford I see a restaurant and a guy walking towards the front door. I ask him if it is any good and says yes and it needs to be since it is the only place for breakfast. I noticed he has some strange Chinese herbal liniment formula in his hands that I happen to have called Five Photos. Since this is a rather obscure piece of knowledge we start talking and I find out he is a retired guy from California who had been a harmonica player in a band to a hunting guide doing mule trains and worked in the forestry service. Breakfast was a little slow and it was probably two hours before I got my food and ate. When I came out they had the main street closed down for the parade. 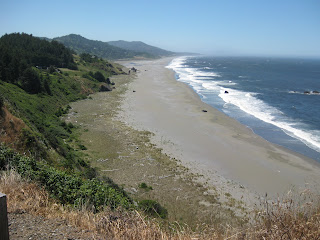 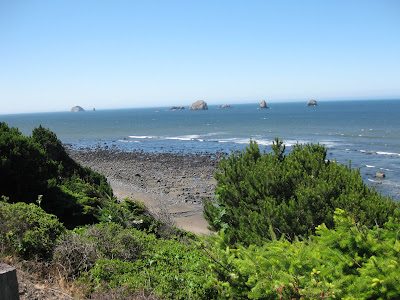 Once out of town the coastal views were so spectacular I was stopping every 5 minutes to look.

I was already at Humbug Mountain which was only another 5 miles or so out of town. The choice was to stop early and camp there or push to the next hiker/biker site at Harris Beach about 45 miles away. With a terrific tailwind it was an easy decision to push on.

So, I still make it in to the campground early at around 3 p.m. There is no one at the hiker/biker site so I set up camp, take a shower and then head into Brookings to pick up some food. Chicken from the deli and a couple beers make supper that night. When I get back Michel  and his son are setting up camp. They had fun watching the parade in Port Orford. We talked about the great riding that day, the terrific scenery and I hear more stories about the ride Michel is doing.

This is a link to Michel's page during his time in Oregon. It has pictures of him and his son.  Check it out.... http://beaudoinavelo.wordpress.com/page/5/
Posted by Sojka's Call at 2:14 PM No comments: