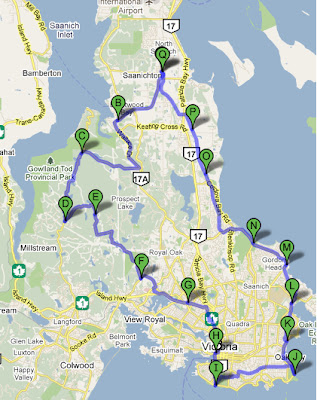 John tells me of his favorite ride that leaves their house and heads into hills, swings through downtown, and then loops out the east side and then back to their house. It is about 50 miles and sounds great.

The ride into the hills through Growlland Tod Provincial Park takes me through an area undiscovered last summer. The landscape is lush and there are few houses. There is little traffic in this area and on the downhills it is fun to let the bike rip a bit without the panniers.

I get to the downtown area and decide to head back to the Swan Pub for a beer and lunch. The Pub is associated with the university in some way. All I know is they make very good beer and the food is better than average.

While sitting at the bar having a beer I talk with a couple other cycle tourists who have just concluded their trip up the Sunshine Coast of BC and then took a ferry over to Hariot Bay and Campbell River and then cycled back to Victoria. They lived in Vancouver but felt their trip was really over since after a ferry ride to Horseshoe Bay they would be home. I filed that away for a possible future trip since I heard about it from a couple other folks as well.

Then I recognize a patron that was in the bar last summer when Rick and I visited. Unbelievable, but, the same guy having his mid-day beer.

After finishing up the ride, I had dinner again with John and Kumiko who were just spoiling me as it were. I really enjoyed talking with them about our children and bike touring and life in general.